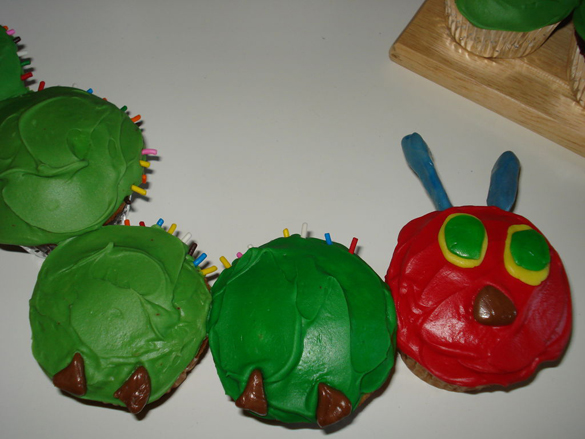 “I tinted the icing green. I would ice a couple cupcakes and then add some red food coloring to tint the icing darker, ice a few more, and repeat. That way the cupcakes had the multiple shades of the caterpillar in the book. The head was, of course, red icing. The feet and nose were sculpted from bits of tootsie roll. The head was iced red and the eyes were flattened, shaped green and yellow taffy candies. The antenna were pink starburst, tinted with a little blue food coloring, wrapped around tooth picks. The cupcakes were arranged on the table, and then I added muti-colored sprinkles along the caterpillar’s back to imitate the multi-colored hairs on the caterpilla in the book. The only thing that I would change, if I were to do it over again would be to add a sun. I would use the same technique that I used for the antenna. Ice the cupcake yellow, mold yellow Starburst around toothpicks for the rays and insert them into the cupcake. Oh well… live and learn. The Very Hungry Caterpillar cupcake cake was still a show stopper.”

This site uses Akismet to reduce spam. Learn how your comment data is processed.

Fancy-Edibles.com concept, logo and graphics design are © Fancy
All art (images and content) pieces featured on this blog are in the exclusive property of the designers and artists that created them.